In a recent article in Anthropocene Magazine about the future of orangutans, Brandon Keim observes “the key to their survival is us not killing them.”

You would be forgiven for thinking that Keim is a master of the blindingly obvious after he offers a statement like this. We all already know that orangutans don’t fare well against spears and rifles. Extinction, these days, often involves being killed.

The point Keim is making in the article, however, is a much more important one for conservation and one to which far more attention needs to be paid. It is abundantly clear that traditional methods of conservation, in which relatively intact-looking landscapes are set aside as biodiversity sanctuaries, is not going to be enough. The sanctuaries are rarely big enough, their borders are rarely protected enough, and the flow of genes necessary to keep the populations inside the sanctuaries healthy is seldom consistent enough. Protected islands of habitat providing safe spaces for vulnerable animals are certainly important. But it is clear they need to be supplemented by other conservation practices.

More and more evidence supports this observation. A new study shows that orangutans, rather than being inherently tied to pristine forest landscapes, are actually remarkably adaptable. They are, as one of the study’s authors proclaims, “smart and ecologically versatile.” One might suspect they ultimately prefer pristine forests but they have shown a healthy capacity to survive in plantations and other mixed landscapes.

This adaptability is so remarkable that, according to Fred Pearce in The New Wild, “three-quarters of the world’s surviving orangutans live in timber plantations rather than old-growth forests.” If this is the case, we surely need a more encompassing way to think about their conservation.

What is true for orangutans, may be true for many other charismatic megafauna. Wolves in Germany, Italy, and even Belgium are proving themselves to be quite capable of living in populated agricultural landscapes. Foxes and coyotes pad through more and more of todays urbs and suburbs. Even Montana’s grizzly bears are finding a new taste for farm-fresh corn and alfalfa, now that their populations are spilling out of their protected mountain retreats into farmer’s fields.

Keim helpfully points out how conservation in the new age of the Anthropocene needs to focus as much on matters of social engineering as matters of ecological protection. If people can find ways to adjust their cultural practices and co-exist with some of these vulnerable creatures, the creatures’ prospects will surely be much brighter.  While protecting core habitat remains supremely important, simply not killing them in the landscapes humans also occupy may, for the orangutan, be a far more decisive factor.

So far so good in this lesson on how to practice better conservation in “the human age.”

A second point that undergirds this primary lesson must also not be missed. Underneath the visible surface something else is needing protection.

Animals like wolves, bears, and orangutans have more chance to survive if the processes that are deeply woven into their existence are allowed to continue unfettered. As Menno Schilthuizen makes clear in his eye-opening Darwin Comes to Town, evolutionary forces still operate whether you are searching for them in a pristine rainforest, a palm oil plantation, a leafy suburb, or even – astonishingly – a London Underground tube tunnel.

Written into the “nature” of life are some fundamentals like mutation, genetic drift, adaptation, and co-evolution. These are the forces that, in addition to the orangutan’s native intelligence and ecological flexibility, hold the promise for helping them survive as a species.

Letting these forces operate (and rejoicing in what they produce) is what Pearce calls “the new wild.” In many ways, however, these forces represent the old wild. They are the forces that have underwritten 3.5 billion years of life on earth.

The authors of the orangutan study are keen to have their readers think more broadly about conservation. They urge more attention to be paid to policies and practices that will allow locals and the highly vulnerable orangutans to co-exist in the same spaces. 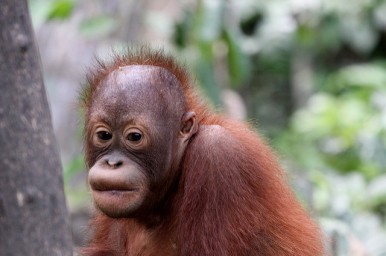 They are no doubt right. But they take this important point further than it needs to go.  In an effort to close with a broader philosophical lesson they conclude, “Dividing the world into natural and unnatural, as well as viewing humans as separate from nature, distorts our perceptions of nature and ourselves and hampers scientific understanding and conservation action.”

It is absolutely true that some ‘unnatural’ spaces, such as farmlands, forest plantations, and parts of the urban-rural interface must be regarded as critical habitat if some of the species we love are to have a future in the Anthropocene. It is false to tie into this claim the idea that the whole concept of nature is now pointless. The natural biological and evolutionary processes operating beneath the surface have served species like wolves and orangutans over millennia. They are as important to leave space for now as they have ever been. Perhaps more so.

If we turn away from this second and deeper kind of nature, the one that has shaped the planet over the vast expanses of deep time, we are cut adrift.

And as we drift, we might lament that we will then occupy only a Synthetic Age.