With two or three hours to kill before we needed to drop off our rental car at the airport, my wife and I just wanted a snack, a cup of tea, and a stroll around a quaint neighborhood somewhere in this (not-to-be-named) unfamiliar city. Clueless about where to go, we pulled off the road and asked three excitable teenagers working at a fast food restaurant where we might find such a neighborhood.

After a couple of false starts during which we were guided towards a fancy restaurant, a pasta chain, and then the financial district, our new friends all converged on the conclusion that Farmhouse Square* (name changed to spare any blushes) was perfect for our needs. Not only did it have what we wanted, it was also on the way to the airport.

Problem solved! We put Farmhouse Square in our navigation and headed that way.

On arrival at our destination, I turned off the engine and groaned. The map promised we had arrived but a parking lot in a gigantic mall off the interstate was definitely not what we had in mind. Wondering if I had misheard our young friends’ directions, we got out the car and ambled towards what appeared to be a metal street sign.

Turning down that opening between JC Penny and LL Bean, we found ourselves in a facsimile of an old neighborhood. Faux brick facades, a delicate fountain, and an outside café surrounded a neatly coiffed green space made of astro turf. On closer inspection, the old street signs spelled out names such as Apple, Nordstrom, and Victoria’s Secret. Cars were restricted to the giant parking lot outside of the “old town” and young parents with kids walked contentedly along sparkling sidewalks, while millennials rocked to unheard beats streaming through their earbuds.

There was indeed a place for a snack and a cup of tea, we could stretch our legs and do some good people-watching. Pleasant outdoor seating invited an early evening drink under strings of delicate white fairy lights, while music played gently in the background.

We were in a fine simulacrum of a neighborhood. It was almost as good as the real thing. 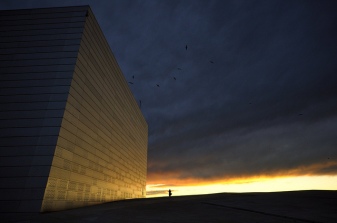 After the initial shock of how different the three teenagers’ perceptions of a ‘neighborhood’ were from ours, I tried hard to talk myself into a more generous state of mind.

The place provided almost everything we wanted. It was quiet, we had the choice of several cafés, and we were away from the traffic. It wasn’t an old neighborhood, but it was a part of town with a particular character, one designed with the pedestrian’s needs in mind (alongside those of their commercial predators).

The source of my initial confusion and disappointment was that the place of our ambulation was not real but synthetic. Now I was asking myself if being synthetic really mattered as much as I had thought.

I point out in the book how technologies such as nanotechnology, genetic engineering, and climate engineering are on the point of substituting what used to be considered natural with something new and artificial, replacing what is “found” with what is “made.” Researchers and engineers are using powerful emerging technologies to reconstitute our surroundings at increasingly deep levels. The biosphere, I offer as a warning, is on the point of becoming another part of the technosphere.

Walking round the faux ‘neighborhood’ ten miles from the airport, I wondered now if this all mattered as much as I had thought. The simulated sidewalk was just as good to walk on (even if the street really went nowhere but to Papa John’s Pizza). The fairy lights were cute (even though it was months before Christmas). It was satisfying to get out of the car and to walk around among other people. Was authenticity as necessary as I had assumed? Functionally, this simulacrum of a neighborhood appeared to work as well – and in some respects better – than the real thing.

You may have some thoughts about this……but here is my two cents worth.

Thinking about nature, the problem seems to be one of the loss of connection to deep time. Several billions of years of geological and biological history, with parameters fixed entirely independently of us, provided us with a gift. They ensured we were all born into something not of our making.

This unchosen natural world has at some fundamental level been our species’ lot. It is the hand we have been dealt. Within this hand we can find reason for doubt and despair, but we can also find opportunity for unbridled joy, fascination, and excitement.

Thinking about the mall, the problem seems to be that the faux neighborhood is contrived. It is conjured up by a person – or a team of people – with an explicit agenda. The synthetic neighborhood is performing a function, in this case the function of providing its users with a few services while making its financiers money.

A real neighborhood, in contrast, just is. It simply emerges, spontaneously, as a product of history and happenstance. It has a story that is not crafted by just one person or one agenda but by an aggregation of dissociated events that yields something of interest. Something of value. The story has its ups and downs but its randomness and aging continuity is part of the appeal.

I like my neighborhoods that way. I think I prefer my nature that way too.