A mother and calf moose were found bedded down in an alleyway in downtown Missoula, Montana this last Friday morning. They were resting up somewhere between a law office and a bank. People showing up for work at the end of the week were warned to look both ways before they ran across the street for their morning cup of Joe.

The same pair had been spotted by residents over the last ten days or so moving slowly closer to the center of town, moseying through a number of Missoula’s urban parks. Heavy snow in the foothills might have nudged them closer to where the snowplows operate and where urban gardens offered some tempting late-winter forage.

What was notable about these moose was that they had not really bothered too many people on their week-long urban saunter. Of course they had to contend with numerous uncouth city-dwellers who got far too close in their quest for a photo of an ungulate peering through a shop window. No doubt a certain amount of good etiquette was necessary on the moose’s part in order to resist the temptation to stomp any number of pesky humans in order to create a more comfortable personal space. 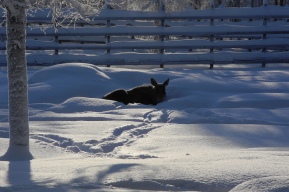 But restraint is exactly what these two visitors managed to display. In all, their trip to the city center went remarkably smoothly, ending only when Montana Fish, Wildlife and Parks determined after a few hours that it would be safer for all involved if the moose were darted and hauled off to a place that looked more like home. Later in the day, the agency posted a video of the two moose hurrying out of the back of a horse trailer and into the woods in the nearby Ninemile Valley looking none the worse for wear for their ordeal.

At the same time as news about the moose was making its way across town, National Geographic posted a story about images that had been captured of a fourteen foot Atlantic sturgeon in the Hudson River. A group of biologists conducting a fish survey were astonished when the screen on their side-scan sonar was filled by a sturgeon twice the size of any others they had seen. A fish so big would weigh in, they estimated, at about eight hundred pounds, give or take a few ounces.

Sturgeon are one of the most endangered fish in the world. Of the twenty-seven species in existence, only two are not threatened with extinction. Their long reproductive cycles, late sexual maturity, and the sensitivity of their ocean-to-river migrations to environmental disturbance makes them highly vulnerable.

The fact that sturgeon are the source of the world’s most expensive caviar does not help either.

In the late 19th century, 500,000 pounds of “Albany beef” were being taken out of the Hudson River each year. By the time the fishery was banned in New York in 1996, the prospects for the Atlantic sturgeon were so dire that shortly after New York’s move a forty year moratorium on their harvest was agreed by all the Atlantic states. 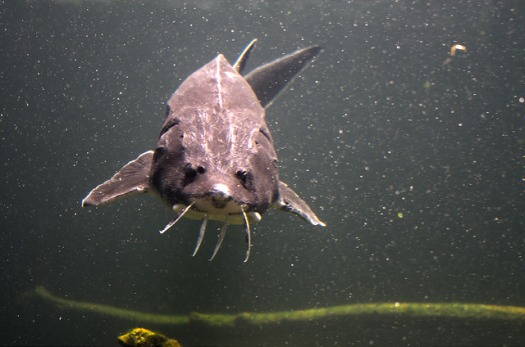 This precarious status is a monumental evolutionary tragedy. Sturgeon have been around for more than two hundred million years, surviving at least two of the planet’s previous mass extinctions. Sometimes called the ‘fossil fish,’ the sturgeon vies with the Komodo dragon  and the alligator for the title of the living animal that looks most like a dinosaur. The knobby bulges known as ‘scutes’ that run in five lines down its sides creates an impression more “stegosaurus” than “catfish.” Its distinctive taste and Jurassic beauty may have been what made the English pass a law in the fourteenth century making the sturgeon a “Royal Fish.” Any sturgeon caught in English waters today is instantly the property of the queen.

What links these two stories is the quite striking capacity of even the most unusual wildlife to successfully find a way to exist in our midst. The sturgeon was found in a zone of the Hudson which for twenty years has been a designated anchor spot for the river’s considerable marine traffic. The moose were found, well,….right in the city center. Despite being shaped by long years of evolutionary toil to live their lives outside of the orbit of earth’s most intrusive species, both moose and sturgeon can find ways to make it work in much closer proximity to us than their genes might desire. Some species are remarkably adaptable to difficult circumstances even as the human imprint continues to press deeper into the fabric of the world.

In the case of the sturgeon, the prolific nature of their ovulation helps a lot. Despite taking twenty years to reach sexual maturity and spawning only once every three to five years, females can lay up to two and a half million eggs. This means that if adequate protections are put in place across each of the key segments of the sturgeon’s long reproductive cycle, the species may be able to rebound even from its current precarious state.

There is hope in these possibilities. There is also an important nudge that they issue to Homo sapiens. If we take our foot of their neck, many of the species we have pushed towards the abyss may possess the wherewithal to bounce back. And once they are back from this painful bottleneck, some of them will prove capable of finding ways to flourish around the ragged edges of a tattered Anthropocene world.

The mandate is clear. We need to offer them a second chance. It is the very least that our finned and hooved brethren deserve.