I crossed the ocean this week on a sparkling new Boeing 787.

This may be the fifth or sixth time I have flown on this model and each occasion leaves me filled with admiration for this emblem of contemporary technology. Fuel efficient, light, and comfortable, the 787 feels like a paragon of what human design can achieve. Years of research, planning, and engineering by thousands of talented people have combined to create a machine almost perfectly fitted to its role.

If the engineering is stirring, the aesthetics is exquisite. The upward sweep of the carbon fiber wingtip holds the eye. The curve on the fan blades that gulp air for the giant Rolls Royce engines embodies a certain kind of grace. The drooped nose and rakish tail give the 787 an aerodynamic look apparently sculpted by nature. It’s the complete package, a head-turner, though some will argue that both its looks and its technological sophistication are matched by the airliner’s main competitor, the Airbus A350. 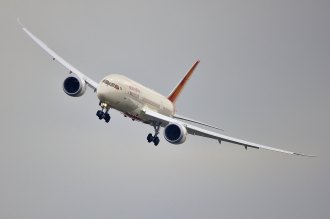 It is not lost on me how boarding the 787 for a transoceanic journey calls forth not just admiration but also trust. You see, I used to be terrified of air travel. I would hesitate for as long as I could before purchasing my ticket. I would get cold sweats for weeks before my flight left the ground. For the hours in the air, my heart would beat faster as intermittent currents of adrenaline surged uncomfortably through my body.

I admit I still try not to spend too much time mid-flight thinking about the fact I’m seven miles above the North Atlantic ocean, more than a thousand miles from land, surrounded by a frigid darkness. But I’m mostly over the nerves now. I have learned how to trust the technology.

This element of trust is on my mind because this trip took me to a pair of meetings about the ethics of biotechnology. Unprecedented options are rapidly becoming available for new ways of manipulating life. The gene editing tool known as CRISPR Cas9 promises the capacity to make targeted changes to genetic chemistry. Organisms may soon be redesigned in ways unimaginable for three and a half billion years of life on this planet. Rather than genomes being shaped by the randomness of mutation, the relentless forces of selection, and the statistical rules of Mendelian inheritance, genomes are increasingly at the mercy of biological engineers working with techniques developed in laboratories.

And yet despite the fact I can clearly get excited by examples of good engineering, I concede that the prospects contained in these new genetic tools make me uncomfortable. In many cases, I’d rather we didn’t go there.

How do I square this hesitance about some forms of biotechnology with my love of a 787?

Part of it, of course, is that engineering complex machines is difficult. For all the admiration I have for aeronautical engineers, the tragic circumstances unfolding around Boeing’s 737 Max aircraft indicate that engineers don’t always get it right. When already complex mechanical systems interact with equally complex social and economic ones, the chances of devastating slip-ups increase. Even when the design is adequate, the pressure to perform leads to lapses in judgment that can come with horrible consequences.

The other part of the hesitance lies in the fact that with biotechnology one is attempting to engineer a different kind of system. While the chemical structures that get switched around in biotechnology are not themselves “life,” genes contain the possibility of unscripted activity capable of upending the engineer’s plans.

In some contexts, it is appropriate to embrace the arbitrariness inherent in genomes. Random mutation is what made the evolution of our own species possible. But randomness makes life harder if you want a system to successfully engineer.

The concern here can be developed along different lines. As a general rule of thumb, I prefer my engineers not to get too mystical. Yet it is an undeniable fact that somewhere between the biochemistry of DNA’s double-helix and the full organism a strange quality called “life” appears. Relatively predictable chemistry turns into somewhat spontaneous biology. Passive physical structure turns into an active organism.

The goal of many of those who work in this research area is to make biology as close as it can be to an engineering discipline. Understanding the physical and chemical properties of DNA and knowing how to effectively manipulate them in a biological setting is no doubt valuable. Such a science offers numerous possibilities. But whether mechanical engineering is a complete enough metaphor for biology is a perennial question. The tools available in today’s biotechnology labs makes the question more acute than it has ever been.

Engineering genomes just feels different from engineering airplanes. This affects my reaction in several ways. For one thing, it is hard for me to think of an engineered genome as beautiful in the same way I can think of a 787 in those terms. It’s not that the biotechnologist lacks the skills or imagination of the aeronautical engineer. Both fields are spectacular areas of human endeavor filled with talented and creative people.

The difference, I think, lies in this. The clay they each seek to sculpt is material of a different kind. While one clay offers a wide swathe of generally – if not perfectly – predictable possibilities, the other contains just a little too much mystery to be treated in exactly same way. The biotechnology engineer bumps up against an irreducible spontaneity embedded in the genome. The aeronautical engineer for the most part works with a more pliant and reliable material.

This explains why, perhaps, in the case of biotech it is not ungenerous of me to withhold just a little bit of trust.

One Reply to “Of Boeings and Biotech: When Trust Is Required”